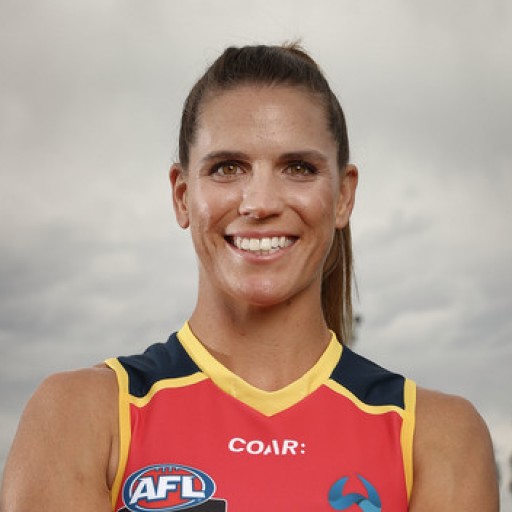 Born and bred in Western Australia, Chelsea started playing football with the boys at age 11. Playing a variety of sports, she pursued a career in football despite the many barriers along the way. Chelsea has spent over eleven years working in the football industry in various fulltime roles. Her experiences led her to move to the Pilbara (North region of WA) for 2 years using sport as a vehicle to engage young people in positive behaviours and attendance at school.

Now a premiership co-captain and multiple All Australian team member, Chelsea was awarded Most Courgeous Player for AFLW in all 3 year of this rapidly expanding competition. Chelsea was also named all Australian captain in 2018.

Chelsea now lives in Adelaide and is a role model to many young people in her fulltime position as a Community Program’s officer at the Adelaide Football Club. Her dream to play AFL was made a reality through her hard work, determination and resilience. Chels is also active in the media, appearing as a boundary rider with 7’s AFLW and SANFL men’s coverage, along with several guest panel spots.

Chelsea’s passion is helping people be the best version of themselves – something she works tirelessly on with her ambassador work with the LINE, Kik Enterprises, AFL Sports ready and through her work as an X- Blades ambassador.

Chelsea is an engaging, dynamic and humble presenter, who happily gives her time with audiences to share her stories of leadership, her role within the AFLW and also people on how to create the best version of yourself.

"Chelsea was an absolute star! Not only was she approachable, she put people at ease, a consummate professional with a real personal touch. Her ‘interview’ remarks resonated hugely with our students particularly…I have had nothing but positive feedback in this regard."