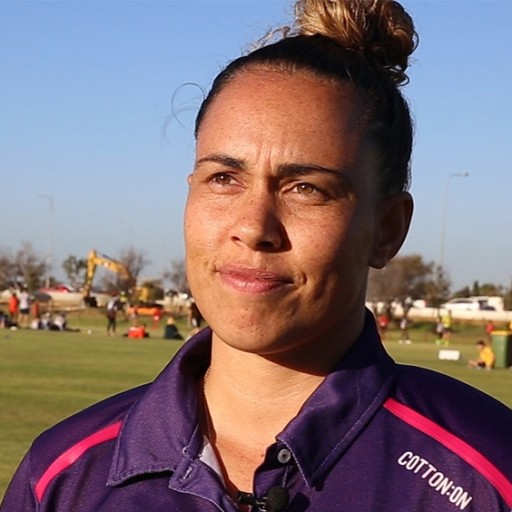 A talented junior netballer from Mt Barker, WA reaching State U17,19 & 21 competing in the WA State Netball to compete in the National League Netball competition from 2004-2009 for the Perth Oriels/West Coast Fever.

After suffering a public and brutal family tragedy she moved to the AFL Womens game in 2009 to be close with her family going on to represent WA in the National Women’s AFL Championship in the same year. With Premierships to follow with both East Fremantle and Swan Districts, she was a priority pick selection for the Fremantle AFLW Inaugural team playing all seven games in 2017. Suffering her second ACL reconstruction competing in the 2017 State of Origin game – the dream to continue as an athlete in the fledging AFLW competition continues on.

Kirby’s diverse and varied employment, marketing and appearance roles have seen her operating as a mentor (education & lifestyle) to young indigenous youth through the Wirrpanda Foundation, planning, appearing and marketing the Kirby Bentley Cup – an Indigenous female youth football carnival in conjunction with the West Australian Football Commission annually.

An AFLW Ambassador for the Fremantle Football Club in 2017 & 2018 for appearances & promotion of the AFL Women competition in 2017 & 2018. She was nominated as a finalist in the Jim Stynes Community Leadership Award 2018.

Kirby also has a Shot Firer license with BHP where she commenced employment in 2013 in blasting operations on site, moving into a supervisory role in Port Control along with her Indigenous leadership responsibilities in 2016 . She has entered Career leave in 2018 to accept the control role as the Reconciliation Action Plan Manager at the AFL.