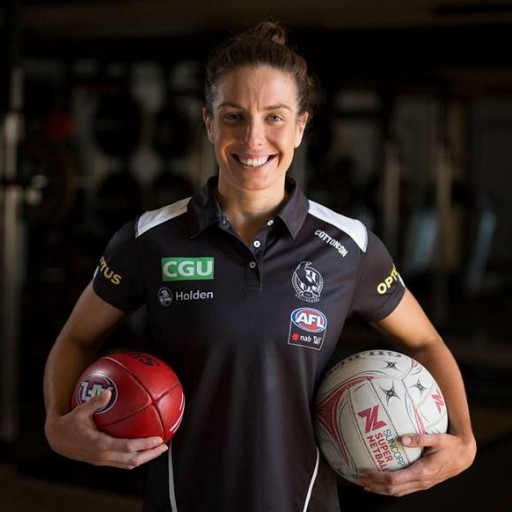 Ash Brazill, as genuine as they come. Brazill is a country kid born and raised in the Southern Highlands of NSW - gifted with freakish sporting talent, and an authenticity about her that’s hard to match.

Australian Diamond #166, Ash Brazill is a weapon on the netball court for Collingwood Magpies netball team, and a shutdown merchant on the field for Collingwood’s AFLW team.

Ash has spent 8 years tearing up the national and international netball court, receiving a host of accolades including national selection, MVP awards and captaincy roles. With a vertical leap of 68cm and lightning speed she’s known for flying on court and taking intercepts. Her grit, tenacity and dedication to team, has seen her widely acknowledged as a players’ player and coach’s dream

Ash is equally comfortable behind a camera as she is in front of one. Photography and videography is where the creative comes out. A self-confessed adrenalin junkie, Ash captures the adventure in her life; the surfing trips, mountain hikes, skiing expeditions - all the downtime from elite sport.

Ash is often described as a trail blazer. A title Ash never fully understood until she was introduced at a luncheon one day as the first openly gay netballer, the first footballer to win Rookie of the year after just 5 games, the first athlete to play two national sporting codes for one club, and the first netballer to have a hashtag trend #justiceforbraz after missing out on a diamonds selection.

Spend 5 minutes with Ash and you’ll get a unique perspective on all things elite sport and what it’s like taking the road less travelled. The challenges, the compromises and the rewards. You’ll walk away feeling genuinely energized by Ash’s engagement, sincere stories and her refreshingly authentic approach.

"Ash was fantastic. She was generous with time and was very happy to meet our young netballers before our lunch. As a speaker on the panel she was thoughtful, engaging and entertaining. We received overwhelming positive feedback on our Inaugural Pride Cup lunch and the speaking panel. She is a remarkable athlete and person. I would recommend her to any other sporting clubs or organisations looking for an impressive role model and presenter."

"Ash was absolutely fantastic speaker. She was very genuine and was the perfect choice of speaker for our Women's Grand Final breakfast. Feedback from our Board of Directors said Ash was part of the best panel of guest the SFNL has had in 10 years. Our breakfast was to celebrate women in sport, netball and football, and with Ash's background she was valued by everyone in the room. She was also willing to sign autographs and have photos taken at the conclusion of the event."

"Ash was INCREDIBLE! We had a number of very specific things we wanted her to cover on the issue of Gender Equity in Sport & she delivered. In fact, she went above & beyond. The way she interacted with staff & students alike was warm & professional. I honestly cannot speak more highly of her as she was very generous of herself & was genuine in her desire to cover what we needed her to. Feedback from my colleagues & many students was glowing & while some students were initially skeptical of having to attend the presentation, their minds was floored by Ash's personal story. They absolutely loved it! Pickstar's booking system was very easy to use & the staff were very helpful. Whenever I made contact, the staff were very prompt in their responses & follow up!"