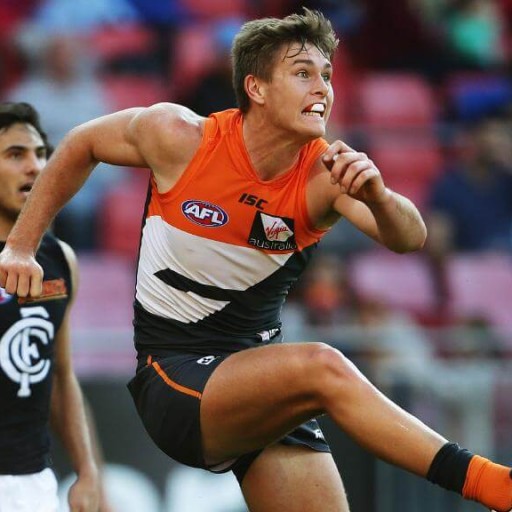 Adam was drafted by the GWS Giants during the 2011 NAB AFL Draft. The tall key-position player was highly demanded by clubs, GWS taking him at pick no. 9. Tomlinson is a product of the Oakleigh Chargers as well as the AIS/AFL Academy. Despite his large size, Adam’s endurance and skills are at an elite level.

Tomlinson debuted for the Giants in the 2012 season, playing a total of 9 games for the year whilst averaging 11 disposals and 4 marks per game. Tomlinson continued his great run of form throughout the following two years, playing 36 games over the course of 2013-2014. After experiencing a slight form slump in 2015, Tomlinson’s form was reignited after being moved down to the backline as a key defender.

Tomlinson’s 2017 campaign was one of great consistency and showing. After playing all 24 games for the year, Tomlinson averaged 13.8 disposals and an impressive 5 marks a game.

In the 2019 season he stepped it up into another gear, averaging 17 disposals and an elite 6.2 marks per game. However, it all ended in heart break with a loss in the AFL Grand Final.

Adam was traded to the Melbourne Demons at the end of 2019 and will hope to continue his great form as a defender.