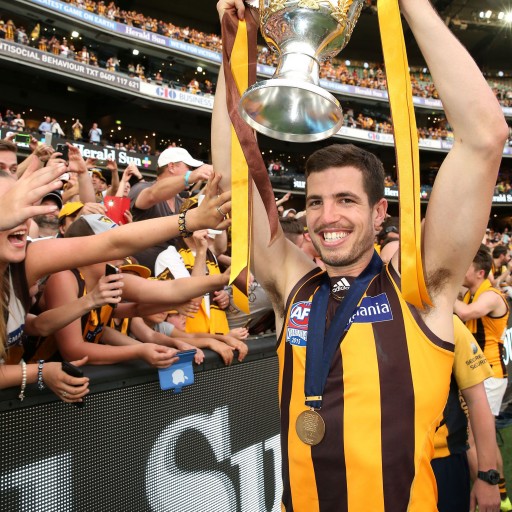 Ben Stratton was a mature-age recruit in 2009 from the WAFL’s East Perth. He posed as an excellent defender, one who can provide great support in both the air and ground. With his versatility, Stratton can line up on various opponents in the back six and often finds his role changing from week to week.

Ben began his AFL career in 2010, playing an impressive 21 games in his debut season. Unfortunately, the following season in 2011 was marred by a knee injury that sidelined him for the remainder of the year. However, despite the setback, Stratton returned to the side in 2012 where he played every game and continued this consecutive pattern over to the 2013. Stratton did not miss a single game over the 2012-2013 seasons. In this time, Ben played in both the losing 2012 Grand Final as well as the victorious 2013 game against Fremantle. To top off a great year,  Ben finished 5th in the Hawks Best and Fairest, and won the award for the Most Consistent Player in 2013.

His 2014 season was interrupted by injury, however he recovered well returning late in the season to play a pivotal role in the Grand Final win against Sydney. His solid form continued in 2015 where he was part of another premiership win making him a triple-premiership player. An outstanding achievement. Ben continued to play great football throughout his 2016 campaign.

2017 was an unfortunate year for Ben as another knee injury sidelined him for the majority of the season, allowing the defender to take the field only 8 times. Stratton will now look towards the 2018 season where he hopes to reach greater heights from himself and the football club.