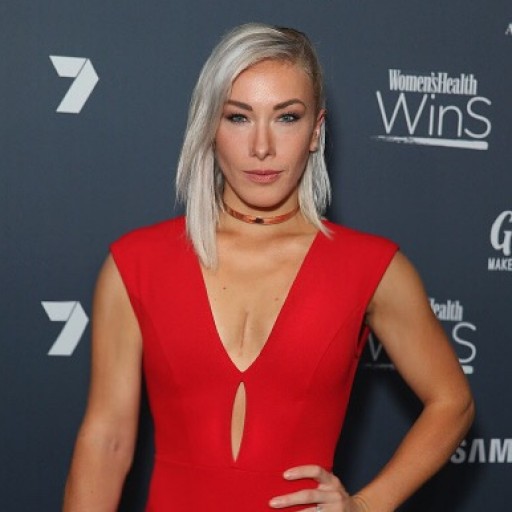 Caroline Buchanan classifies herself as more than a cyclist – though her passion for anything with two wheels is what drives the dream.

An athlete, businesswoman, social media influencer, mentor, proud advocate for women in sport and reality television tragic, world champion and Olympian, Caroline has been ear-marked as one of the new guard of Australian Athlete.

Her down to earth attitude makes her one of the most approachable Australian sportswomen, despite having achieved six elite World Championships and twenty Australian National titles over three cycling disciplines.

Equally at home dodging trees downhill in the mud on a mountain bike, or flying over jumps on a BMX bike, Caroline has dominated both cycling disciplines, and she gets just as much enjoyment teaching two year old’s how to navigate their very first turn on the track on a balance bike.

Whether she spends her day in the gym or in front of a TV camera, presenting to a corporate crowd or striking a pose for a fashion photographer, Caroline brings passion and persistence in her pursuit of perfection.

"I love challenging myself physically and mentally in all sports and whatever life throws at me.  I'm addicted to adrenaline and anything with two wheels. Female empowerment, progression of sport, French Bulldogs, marketing and media is my passion."

But it’s not just on the BMX track that Caroline’s determination and emotional resilience can be seen. In 2013, and at the young age of 13, Caroline had her family home ravaged by the Canberra bushfires leaving nothing behind but a washing machine with a single load of clothes inside. Grabbing their most valuable possessions in their flee, the BMX trophies and their bikes, Caroline used the tragic event as a driving force behind her pathway towards greatness.

“It didn't matter where we lived after that, what was going on or what we did or didn't have, we had sport”

A true testament to her nature, Caroline continued to apply herself to the sport, resulting in her cementing herself as one of the biggest names in both BMX and Mountain Biking. It wasn’t long however until she came face to face with another life altering event.

At the end of 2017, Caroline found herself in a life-threatening condition when an off-road buggy, of which she was a passenger, flipped during a drive on a friend’s farm, leaving her laying in excruciating pain and struggling to breath.

After being rushed to hospital, doctors took three days to drain 2.5 litres of blood from her lungs before spending four days in an intensive care unit, all before the long months of rehabilitation and recovery even began. Caroline definitely wasn’t backing down though and was immediately found setting her next goals for after her recovery.

Caroline’s personal values of equality, hard work and respect motivate her to live by one of her mottos - "overcoming what life throws at you makes you stronger”. She is particularly proud to utilise her public profile to progress the role of women in sport. Caroline launched Buchanan Next Gen, an all girls BMX team in 2013 established to financially assist, mentor and promote the cause of young women in one of her chosen sports.  The team is comprised of high achieving up-and-coming women united by ambition and a teamwork mindset. Caroline raised over $10,000 in order to fund the teams travel and participation in theBMX World Championships in Rotterdam, $15,000.00 to go to Zolder in Belgium and with the help of sponsors, $12,000.00 to go to Medallin Columbia.  Her program was widely recognised, she was asked to make a presentation at the 6th IWG World Conference on Women and Sport in Finland. Caroline acted as Canberra’s only Australia Day Ambassador for 2014, where she and Adam Gilchrist (Chair, National Australia Day Council Board) represented Australia in welcoming the newest Australian citizens alongside then Governor General Dame Quentin Bryce and Prime Minister Tony Abbott.

Caroline has broken new ground by offering an insight to her personal and professional life through multiple social media platforms, as well as regularly representing herself on national television programs such as The Today Show, Sunrise, Cycling Central, Fox Sports, Full Cycle and countless newspaper pieces and national radio broadcasts. Off the track, she delights in the opportunity to embrace a double life for professional photoshoots and has been featured in interviews in industry and lifestyle print media publications such as Womens Health, Marie Claire, InStyle, Dolly and the Harley Davidson Magazine to name a but a few. Caroline has co-produced a series of professional ‘Webisodes’, released via her YouTube Channel, in which she represents both herself, her sponsors and her sport. ‘Buchanan On Air’ and the ‘SIX-8’ series bring her fans along for the ride of life on the road, racing, and the highs and lows of life as a professional athlete. These have each been made into documentaries that have featured on the Fox Sports channels and airlines such as KLM, Air New Zealand and United. Her social media following of over 200,000+ allows her to engage and be motivated by her fans on a daily basis, as well as actively and passively promoting her sponsors – blue chip and small business alike.   With her ever-present smile and bubbly personality, Caroline is recognised and respected for her achievements, her passions, versatility, dedication and individuality.

"Caroline was incredible. The team really loved hearing her story and advice."