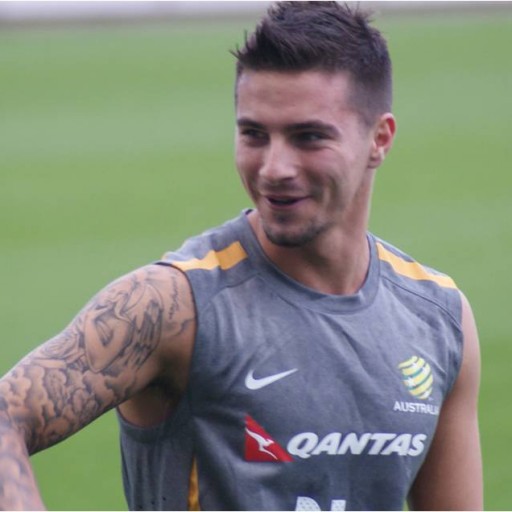 Jamie Maclaren is a striker with the Socceroos and Melbourne City in the A-League.

He's known as a penalty box predator, with plenty of speed on and off the ball and a great finisher in front of goal.

Jamie made his international debut for Australia in 2016 and was part of the Socceroos squad at the FIFA World Cup in 2018.

He joined Melbourne at the start of 2019 as a marquee player on a long-term deal.

Jamie returned to Australia after a stint in Europe, where he played with German club SV Darmstadt 98 before joining Scottish club Hibernian on loan. Preparing for the 2018 FIFA World Cup, Maclaren had no trouble finding the back of the net and ended his season in Scotland with a hat-trick in a 5-5 draw with Rangers.

Earlier in his career, Jamie played with Perth Glory and Brisbane Roar in the A-League. His time with Brisbane was most fruitful, scoring as season record 20 goals and winning the FFA's Young Player of the Year Award in 2015-2016. He backed this up the next year, tying for the A-League's Golden Boot Award.

A promising junior, Maclaren was signed by the Blackburn Rovers in England and despite being a regular in the under-21 team, was not able to break into the first team.

He comes from strong footballing stocks, his father and uncle were both professional players. Jamie briefly represented Scotland at youth level (eligible through his father) before committing to Australia.