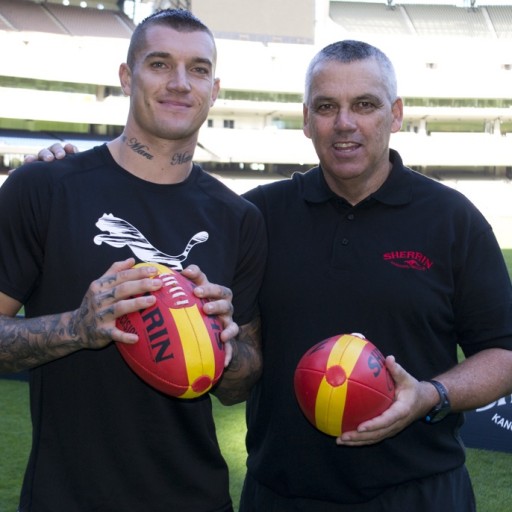 He formed a close bond with Brownlow Medallist Dustin Martin, and a host of other champion players.

He's a cancer survivor. A father of 5. An innovator who has designed his own Sherrinn football. A true champion in all aspects.

His background in teaching has given him a unique advantage to develop high performance / teamwork frameworks which enable Organisations to implement these after his speaking or workshop events.

Mark's corporate speaking & leadership workshops are in high demand across Australia and his style is authentic, passionate, intimate and gives you an unmatched look behind the scenes.

One of several successful father-son combinations in Australian rules football, Williams became a successful coach after finishing his playing career, leading Port Adelaide to their first AFL premiership in 2004.

Early life and career
The son of South Australian football legend Fos Williams, Williams playing career began with West Adelaide, where his father was serving as coach. He represented West Adelaide on 64 occasions for 37 goals. Williams then moved to the Port Adelaide Football Club, becoming one of the stars of the SANFL.

Moving to Victoria (1981–1990)
After the 1980 season, Williams was recruited by Collingwood, making his Victorian Football League (VFL) debut in the 1981 season. Williams justified the hype over his recruitment by winning state selection for Victoria as well as the Copeland Trophy. He was named at centre for Collingwood in the Grand Final against Carlton. Collingwood lost, but Williams was recognised as being among the Magpies' better players on the day. When John Cahill took over as coach after a tumultuous season in 1982, he appointed Williams captain, having previously worked with him at Port Adelaide. Williams remained captain of Collingwood until he left at the end of 1986.

In 1984 Williams led Collingwood's goal-kicking, kicking 53 goals for the season. However, he was unavailable for the Preliminary Final due to injury, and Collingwood went down to eventual premiers Essendon by 133 points.

A contract dispute at the end of the 1986 season saw Williams reluctantly[citation needed] make the move north to join the fledgling Brisbane Bears. He was appointed vice-captain to Mark Mickan at the new club. Williams played three and a half seasons before retiring from the Bears midway through the 1990 AFL season.

Return to South Australia (1990–1992)
Williams returned to Port Adelaide, and finished the 1990 season there, before playing a further two seasons. In his two stints at Port Adelaide, Williams played 115 games, kicking 104 goals, and won four premierships. He retired from playing at the end of 1992, with a total of 380 league games to his name.

Port Adelaide Football Club (1997–2010)
In 1997, Williams joined Port Adelaide as an assistant coach in its inaugural season in the AFL, and in 1999, won the head coaching role at Port Adelaide, replacing John Cahill. Port Adelaide won the minor premiership three seasons in a row under Williams' reign (2002, 2003 and 2004); after failing to reach the Grand Final in either 2002 or 2003, the club went on to win its first AFL premiership in 2004. In 2007, Williams once again coached Port Adelaide to the Grand Final, but his side suffered the worst ever grand final defeat, losing to Geelong by 119 points. Throughout 2009, Port Adelaide's inconsistent on-field performances continued to focus on Williams' future at the club. Late in the season, following the appointment of Mark Haysman as CEO, and after much conjecture in the media, Williams was offered a new 2-year contract. On 9 July 2010, Williams resigned as coach of Port Adelaide and coached his final game for Port Adelaide against Collingwood at AAMI Stadium.

Werribee Football Club (2019–present)
Williams was announced as new coach of Victorian Football League club Werribee on a three-year deal, taking them to their first final in years, in his first year.

Williams comes from a large and intensely proud footballing dynasty, closely aligned with Port Adelaide. His father, the late Fos Williams, is often referred to as the father of the Port Adelaide Football Club. His twin brother Anthony played at SANFL level, while younger brother Stephen played at both SANFL and AFL level and coached Port Adelaide to three SANFL premierships. His sister, Jenny, briefly served as a psychologist with the club. Mark is married to Pauline and they have three sons and two daughters.

"The presentation really hit the spot and your focus on connectedness, care for your teammates and those around you, keep a light-hearted philosophy and showing humility were things that resonated with the team. I've followed you VFL/AFL career and always loved your colourful, passionate approach and way you went about things so to be able to talk to you one on one and hear your great insights was phenomenal. Thanks so much Mark, greatly appreciated."

"Mark Williams was amazing. He was energetic, powerful, inspiring and insightful!"

"We were lucky enough to have Mark Williams join our monthly staff update. He was engaging, insightful, thought-provoking and exceptionally generous with his time. The whole team was riveted and thoroughly enjoyed hearing his thoughts, it was especially good that Mark was able to connect everything to our corporate environment too. There were lots of questions & interactions as well. It was a great session. Highly recommend both Mark & PickStar!!"