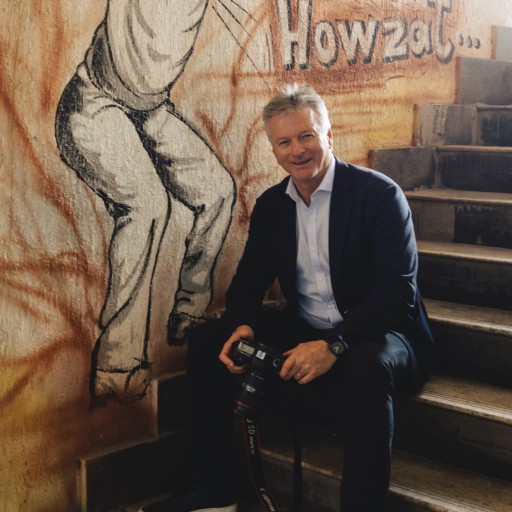 Steve Waugh, AO,  played 168 Tests for Australia, collecting 10,927 runs on the way, and a further 325 International one-day games. A series of epic innings highlighted his career, none better than his 200 in Jamaica in 1994-95 to speed Australia to an historic series win, or his twin hundreds at Old Trafford to turn the 1997 Ashes series.

As Australian Captain from 1997 to 2004, Waugh was known as an attacking and sometimes ruthlessly efficient captain he led Australia to fifteen of their record sixteen consecutive Test wins, and to victory in the 1999 Cricket World Cup. He is considered the most successful Test captain in cricket history, with 41 matches won and only 9 matches lost with a winning ratio of 72%

At the end of his final Test match, in 2004 Waugh was carried by his teammates in a lap of honour around the Sydney Cricket Ground.

Following his retirement from Cricket, that year he was named Australian of the Year. Steve was inducted into the ICC World Cricket Hall of Fame in front of his home fans at the Sydney Cricket Ground in January 2010.

Steve has been included in a list of one hundred Australian Living Treasures by the National Trust of Australia, awarded the Order of Australia and received the Australian Sports Medal.

He is only one of four Australians to have been invited to join the prestigious Laureus World Sports Academy and only the 4th cricketer to be so honoured.

Since his retirement, Steve has swapped his cricket whites for a business suit and tie, and built an enviable reputation as observer on the game he loves, an author of 14 books and worked with the Australian Olympic team and the Australian soccer team in mentoring and athlete liaison roles.

He has also devotes much time to charity — most notably through his patronage of the Udayan children’s home in Kolkata, India, and the Steve Waugh Foundation in Australia, supporting children fighting rare diseases.